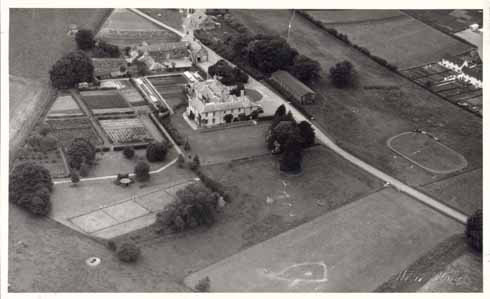 Knighton House was built in the mid-18th century and was originally Durweston's village farmhouse. Knighton became part of the prestigious Portman family estate in 1774, when Henry William Portman purchased Knighton House along with the village of Durweston.

In 1830 Knighton House was extended and became the dowager house for the Portman family, whose principle property was the palatial Bryanston House in the neighbouring village of Bryanston.

Upon the marriage of the Lord Portman's granddaughter Lena, in 1885 to the brother and heir to the Earl of Leven & Melvillein, over nine hundred locals accepted an invitation to view the opulent collection of wedding gifts on display at Lena's home, Knighton House. Amongst the many hundreds of gifts on display in the dining room were the Countess of Leven's family diamonds and a bracelet of diamonds and sapphires gifted to the couple by the tenants of the Dorset estate.

Various members of the Portman family inhabited the house until 1950 when ownership of Knighton, along with the rest of the Bryanston and Durweston Portman Estates, was taken over by the Crown Estate as part payment for the Portman's outstanding death duties.

It was around this time that John and Peggy Booker moved from their school in Ilminster to open a new mixed preparatory school at Knighton House. After a couple of years Knighton House became an all girls prep school and the house and outbuildings were adapted over the years to accommodate school life.

To this day, Knighton House remains a successful and highly regarded day and boarding school for girls and the house is now in the ownership of the school. For the first time in its long and rich history Knighton House is available for hire as a Dorset wedding venue, for both weddings and other events, forming a new and exciting chapter in the history of Knighton House.